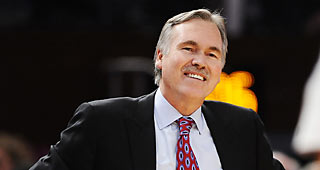 Mike D’Antoni delivered a postgame rant after the Los Angeles Lakers blew an 18-point lead and lost to the Washington Wizards on Friday.

"This is a good team that just for whatever reason can't collectively mentally get stimulated to [play hard] every time," D'Antoni said. "I told them today, we put our hands in [the huddle], and you guys have probably seen it, we say, 'Championship,' and go out [on the floor]. That's laughable. Championship? You got to be kidding me. Nobody understands the importance of every possession offensively and defensively. Every time they got to come out with some kind of determination to be a good basketball team, and [until] then, we're just, we're fooling ourselves. Right now, that's what we're doing. We're just making a 'sham-mockery' out of it."

The Lakers went to Kobe Bryant down the stretch, but in the final two minutes, Bryant missed four of the five jumpers he took, including an attempt that would have tied the game as time expired.

"That ball will roll around and go in for [the opponent] and it will roll around and go out for us because we're messing with the game. If we don't change that, obviously we won't make the playoffs, but if we do, we'll get blown out in the playoffs. You can't be a fairly good team or even a good team without passing the basketball, without understanding what we're doing defensively and honing in and doing it. You can't do it. You can't do it. It's impossible."