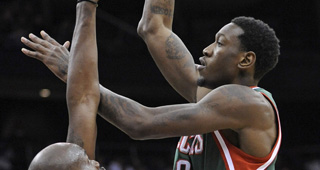 Monta Ellis and Larry Sanders nearly engaged in a physical confrontation after Game 3 of the Milwaukee Bucks' first round series against the Miami Heat, according to four sources.

The Bucks were swept by the Heat in four games.

The two players had to be physically separated.

One source described the confrontation as “just words between teammates in the locker room.”

Sanders made a speech following a 13-points loss on the Bucks' home floor in an attempt to rally his teammates.

Ellis “took umbrage,” according to another person with knowledge of the situation.

Ellis and Brandon Jennings will likely be free agents this offseason.