Luol Deng Doesn't Plan To Have Repair Procedure On Wrist 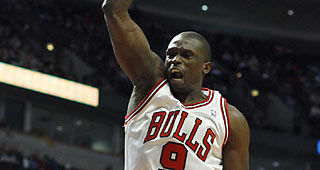 After playing a second consecutive season with a torn ligament in his left wrist, Luol Deng doesn’t plan to have any procedure to repair the wrist, a league source told RealGM.

Deng made his second straight All-Star team this season for the Chicago Bulls, averaging 16.5 points, 6.3 rebounds and three assists in 75 games. He decided to bypass surgery after last summer’s Olympics and played all season with his wrist taped.

Instead of undergoing surgery, Deng will rest his wrist. He also dealt with a fractured thumb earlier in the season.

Deng led the Bulls to a 3-1 series lead over the Brooklyn Nets in the first round, but he missed the final seven games – including the series win – of Chicago’s playoff run due to lingering symptoms from a spinal tap. He’s since recovered and felt better. The Bulls’ season ended in a Game 5 series loss to the Miami Heat on May 15.

Over the past two seasons, Deng has cemented himself as an integral, durable forward on the Bulls, establishing himself under Tom Thibodeau as one of the NBA’s elite wing defenders.