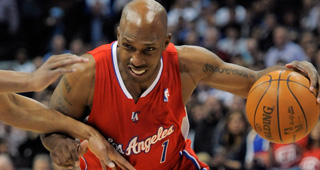 Chauncey Billups has won the NBA's inaugural Twyman-Stokes Teammate of the Year award.

"What better way to honor the life-long bond that developed between Jack Twyman and Maurice Stokes than by naming this award after them," said NBA Commissioner David Stern. "The Twyman-Stokes Teammate of the Year Award recognizes friendship and selflessness among teammates and celebrates the legacy of Jack and Maurice."