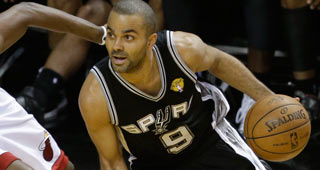 Tony Parker suffered a hamstring injury in Game 3 of the NBA Finals on Tuesday and his status is uncertain for Game 4 on Thursday.

Parker, who could not remember which play he hurt the hamstring, will undergo an MRI on Wednesday.

“Hopefully it’s nothing big and it’s just a cramping, or got tight on me,” said Parker, who returned briefly in the fourth after the injury. “It was just a weird feeling. The doctor said I was OK…and we were up big so Pop didn’t want to take a risk. We will see [Wednesday].”

Parker reported no pain after the game.