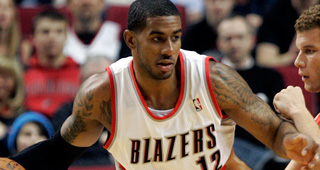 LaMarcus Aldridge has wanted out of Portland since the last week of the Trail Blazers' season and did not re-sign sponsorship deals in Portland this past year, including agreements with Cadillac, Chevy, and Providence Hospital while asking to get out of a lease on his Pearl District condo.

Aldridge tried to put a clause into his lease that he will not have to pay penalties if he was traded.

“This is why I hate being in Portland,’’ Aldridge said during the last week of the season. “You can’t do anything.’’

According to the report, Aldridge would not only welcome a trade from the Blazers, but he hopes for one, believing the city is too boring and small.

Neil Olshey said he sympathized with the constant change Aldridge has gone through with the Blazers, but the GM was adamant he would not be shopping the All-Star forward.

“Well, I’ll tell you this: I’m not going to be making any phone calls to move him,’’ Olshey said. “But if the phone rings and it makes the team better ...’’