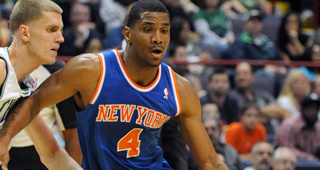 With the New York Knicks set to decline his team option, James White will become an unrestricted free agent and has received interest from several other NBA teams, agent Bill McCandless told RealGM on Saturday afternoon.

Popular overseas, White’s representatives are in dialogue with one European League team, and they expect further interest throughout Europe and Asia. White averaged 2.2 points on 34.1 percent three-point shooting in 57 games with the Knicks last season, the 6-foot-7 guard’s third year in the NBA.

“I don't know what it will be, but I am sure that James will make more money in 2013-14 than he has in any prior season,” McCandless said. “James loved his time with the Knicks, and he’s looking forward to a new team, where assuredly he would play more.”

The Knicks had discussed with White the possibility of extending the deadline on his option, but management leaned strongly against exercising it after the draft. New York selected Tim Hardaway Jr. with the No. 24 pick in Thursday’s draft.

White, 30, was part of the San Antonio Spurs’ championship team in 2007 and participated in the dunk contest this year.