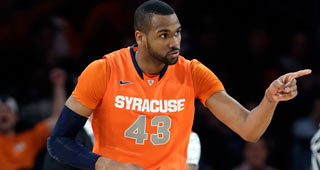 James Southerland received consideration from the San Antonio Spurs to be drafted with the No. 58 pick in last week’s NBA draft, but the Syracuse alum never had a guarantee out of the organization that simply asked whether he would spend next season overseas, a league source told RealGM.

While Southerland didn’t know if the Spurs would ultimately select him, he understood going undrafted provided an opportunity to showcase himself around the NBA. Late in the second round, Southerland never received an offer from the Spurs, much less one to formally reject, a source said.

Drafted or not, Southerland has the same circumstance: Nothing is guaranteed yet and he will play for a contract in summer league; now with the Philadelphia 76ers in Orlando and the Golden State Warriors in Las Vegas. For Southerland, a reunion with his Syracuse point guard, Michael Carter-Williams, is appealing on the 76ers.

Had the Spurs taken Southerland, a spot on the regular season roster was improbable and there were no incentives for him to play overseas in 2013-14.

Southerland, 23, has understood the immense benefits of going undrafted in his case, working toward a guaranteed contract now in front of all 30 teams rather than being locked into one. He averaged 13.3 points in his senior season at Syracuse and placed himself among the pure knock-down shooters in the draft.