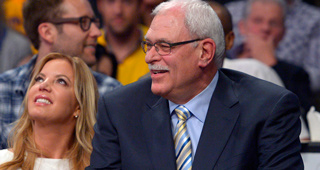 Phil Jackson does not have an official position with the Los Angeles Lakers, but he has made it clear to Jeanie Buss that he would listen to potentially filling any capacity.

Jim Buss understands Jackson is available for the Lakers and says he is open to bringing back the legendary coach.

"We can call him at any time," Jim Buss said. "(GM) Mitch (Kupchak) has sat down with him several times, especially with the Dwight situation. I'd be more than happy to have him on a consultant basis. I don't think we're paying him and I don't know if he has an official title. I have no idea if Jeanie wants to sit down and discuss that. But I have no issues with him coming back or having a role."

Jeanie even believes Jackson would be open to filling a broadcasting role if needed.

"He wants to be supportive of me and the organization," she said. "He has no contractual obligation. He would listen to anything where he might be able to help. If we asked him to fill in on the broadcast because someone was out, I'm sure he'd do it. Just because everyone puts him as a coach doesn't mean that's the only thing he's capable of doing."