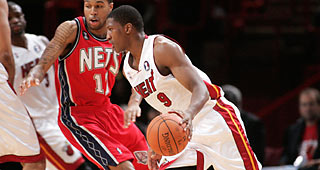 Yakhouba Diawara – the free agent who garnered interest out of NBA teams this summer – expects to sign a contract with a Eurocup club this week, a source told RealGM.

Diawara still will work out for the Miami Heat on Tuesday and the Orlando Magic on Wednesday, a league source told RealGM. For Diawara, the only incentive that would keep him from signing with the Eurocup team is a guaranteed deal in the NBA.

Diawara had been considering potential options in the NBA and overseas from his offseason home in Miami, but signing in Europe emerged in recent weeks as the most likely outcome. At 6-foot-7, Diawara has always exhibited tantalizing length to go with athleticism and a defensive mindset.

After a standout college run with Pepperdine, Diawara, 31, entered the NBA in 2006 with the Nuggets, playing two seasons in Denver. He signed a multi-year deal with the Heat in 2008, but the French forward was released in 2010 and has played in Italy over the past three seasons.