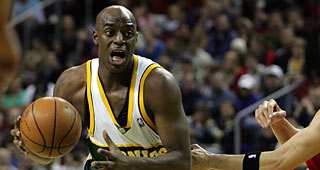 Free agent Damien Wilkins has been working out for his former team – the Hawks – in Atlanta and worked out for the San Antonio Spurs last week, sources told RealGM.

Wilkins has exhibited impressive moments in the workouts, and the Hawks have shown interest in free agents who can complete their depth at the wing. No deal is imminent for Wilkins, a source said.

Wilkins had a resurgent season with the Philadelphia 76ers in 2012-13, averaging his most points per game (6.4) since 2007-08 and receiving a reserve role under Doug Collins. He also shot 45.9 percent from the field.

Wilkins, 33, has averages of 6.3 points and 2.4 rebounds over nine seasons with Seattle, Oklahoma City, Minnesota and Detroit. Wilkins played 52 games for Atlanta two years ago.