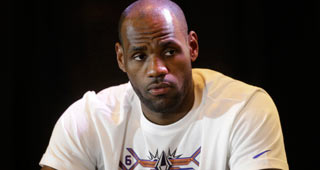 Speaking to students at the rally, James said he would have played at Ohio State University if he decided to play one season of college basketball instead of entering the NBA straight out of high school in 2003.

"I promise, I say this all the time -- if I had one year of college, I would have ended up here," James said. "No matter where I go in the world, no matter where it is, I will always rock Ohio State colors."

Earlier this month, Ohio State unveiled a special locker dedicated to James inside the Schottenstein Center, where the basketball team plays its home games.