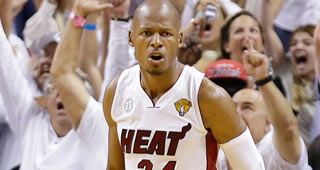 Ray Allen began the Paleo diet a few days after the Finals and is his lightest weight since college as he enters training camp at 38.

“The first three or four days, it was a task because I was getting headaches, my body felt like achy, but I just started living on salads and fruit and protein and salmon and chicken and I didn’t have soda, any Gatorade,” Allen said. “I had unsweetened iced tea and water and that’s it.”

Pat Riley suggested to Allen that he come in lighter.

Allen now plans to snack on pecans, cashews and plantain chips during flights.

“I like to be able to recover quicker. As I’ve gotten older, I’ve learned how to manage my body from an eating standpoint. I’ve always done it, but I’ve taken it to the next level.”