Fab Melo: Celtics 'Didn't Give Me A Chance' 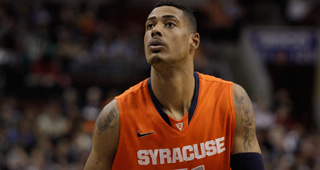 Fab Melo was traded by the Boston Celtics in the offseason despite being the organization's first round pick in the 2012 NBA draft.

In Melo's mind, he was never given the opportunity to earn a role on the Celtics.

"They didn’t give me a chance," Melo said of his rookie season with the Celtics. "Even in practice I wasn’t getting a chance."

The Dallas Mavericks signed a non-guaranteed deal with Melo, who was waived by the Memphis Grizzlies.