Chris Paul, J.J. Redick Needed To Get Over Dislike Of Each Other 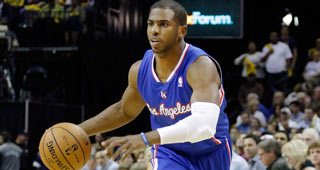 Chris Paul and J.J. Redick held a dislike toward each other as opponents at Wake Forest and Duke, respectively, and then carried over the hatred in the NBA.

Both guards had to get over their rocky relationship when they became Los Angeles Clippers teammates in the offseason.

"We have actually had a chance to become real close, real quick," Paul said. "Who would have thought after the battles we had in college. ... Before I got to know him he was no friend of mine. It is what it is. But that's how it was in college."

Said Redick: "We connected right away."

The boiling point between Paul and Redick came in the summer of 2004 when both were counselors at the Jordan Brand Camp in Santa Barbara, Calif. During a scrimmage between the two, Redick became so irritated that he struck Paul.

"I actually had to apologize to him," Redick said. "…I put my hands on him during a game. It was a hand to the face type of move. I don't know how to describe it.

"We were in the dorm at UC Santa Barbara, and I was told I had to apologize to him. I knew he didn't like me then, but he did [accept the apology]."