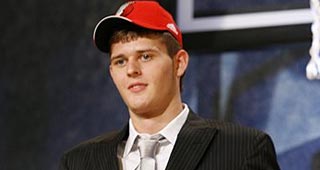 In Thursday's preseason win over the Golden State Warriors, Freeland played 15:27 while Leonard did not enter the game until late in the fourth quarter.

The Blazers have been impressed with Freeland's defense.

The role that he has, he’s earned a lot of respect from his teammates and the coaches by how he’s impacted the game defensively,” Stotts said. “He had two rim protections tonight, made an impact on the game. We need defense out of that position, and Joel’s earned that.”