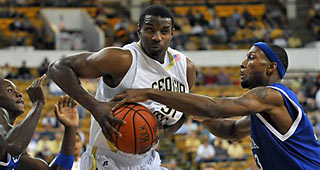 Lawal inked a multi-year contract with the Philadelphia 76ers early last month, but he played six preseason games, would be given only a limited role in the regular season, and was ultimately released on Oct. 26.

“Gani is very excited about this opportunity with Milano,” Bennett said. “There is going to be a heavy NBA presence, with scouts, and he could go back there after another solid season. He’ll just continue to build his brand, his game.”

An active, rugged forward, Lawal, 24, had his best professional season last year as a member of Virtus Roma of Eurocup, averaging 13.3 points, 8.8 rebounds and 1.4 blocks.

Lawal, a second round pick of Phoenix in 2010, played one game with the Suns three seasons ago.