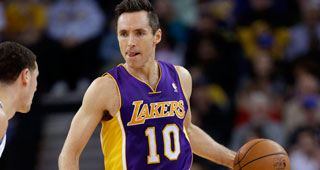 The Los Angeles Lakers are not trying to push Steve Nash toward retirement.

Nash is out at least two more weeks because of nerve damage in his back.

Nash earns $9.3 million this season and $9.7 million next season. Nash would receive full compensation if he is found physically unable to play, but the money would come off the Lakers' cap.

Medical retirements in the NBA are rare.

The Lakers could use their "stretch provision" to waive Nash next summer and spread out his final $9.7 million over three seasons.

"Steve will just have to get back as soon as he can and then we'll see where we are," D'Antoni said.