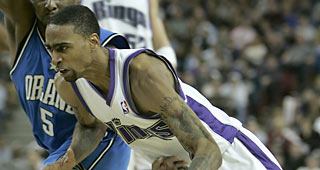 NBA D-League guard Quincy Douby has reached agreement on a one-year deal with the Shanghai Sharks of the Chinese Basketball Association, a source told RealGM.

Douby had been the No. 3 pick in the Development League’s draft, and he further cemented himself as a strong call-up candidate with a 20-points-per-game start to the Sioux Falls’ season.

With Shanghai, Douby significantly bolsters a scoring backcourt that lost Von Wafer for the year, teaming with Indiana Pacers camp invite Darnell Jackson at point guard. Shanghai is expected to go deep in the Chinese playoffs, a scenario that could prevent Douby from signing in the NBA late in its season.

After three seasons as a standout at Rutgers, Douby went 19th in the NBA Draft in 2006 to the Sacramento Kings and played two seasons with the organization. He signed a free agent deal with the Toronto Raptors in 2009, but was later released.

Douby, 29, has averages of 4.1 points and one rebound while shooting 31.2 percent from three-point range over three NBA seasons. The 6-foot-3 sharpshooter closed the 2012-13 season with Zhejiang.