Greivis Vasquez Wants To Spend Rest Of Career With Raptors 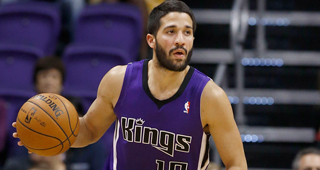 Greivis Vasquez was an integral piece of the trade between the Toronto Raptors and Sacramento Kings and the point guard expressed excitement about his new opportunity.

Vasquez also hopes to spend the rest of his career with the Raptors, which would include re-signing with the organization as a free agent in the offseason.

"I'm excited here," Vasquez said. "I want to play for the Toronto Raptors and win a lot of games here. And hopefully I stay here my whole career.

"Sometimes it works and sometimes it doesn't work and unfortunately it didn't work in Sacramento, but I have nothing against the franchise or the guys who played there. It's just I've (turned) the page."