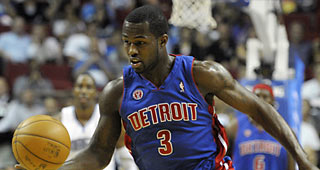 Rodney Stuckey is on an expiring contract and understands he could be moved by the Detroit Pistons at the trade deadline, but the veteran guard is not focusing on speculation and is worrying about playing.

The Pistons could look to acquire a player who will help space the court.

"Why wouldn’t you want a 3-point shooter to spread the floor? Anybody would take that. It’s not up to me, you’re putting a lot of heat on me. To tell the truth, it’s on (Joe Dumars) and the rest of those guys to make that decision."