Source: Bulls 'More In Play' For Carmelo Than Lakers 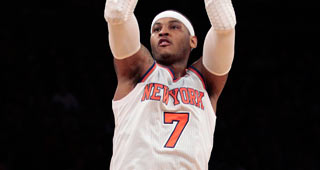 The Bulls traded Luol Deng for draft picks and are leaning toward using its amnesty provision on Carlos Boozer. The Bulls could sign Anthony to a max contract to have him join a core of Derrick Rose, Joakim Noah and Jimmy Butler.

"Chicago is much more in play for him than L.A.," the source said.

The Knicks are cap-strapped until 2015, but the Bulls have "shown themselves to be a big market franchise with small-market sensibilities," writes Wojnarowski.