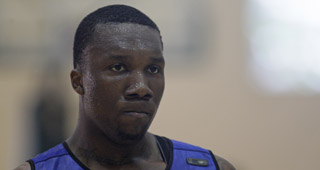 Behind an assertive two-month stretch with Delaware of the NBA Development, Tiny Gallon has received – and rejected – a nearly six-figure proposal from Liaoning in the Chinese Basketball Association, sources told RealGM.

Liaoning pursued Gallon to bolster its roster for the upcoming Chinese postseason, but Gallon had made clear his desire to remain in the D-League and chase a return to the NBA.

Gallon posted two of the D-League season’s most impressive performances in January, totaling a combined 63 points and 41 rebounds in back-to-back games for Delaware. For the season, the 6-foot-9 big man is averaging 16.9 points and 9.4 rebounds in 18 games.

Gallon, a second round pick in the 2010 NBA draft, had dropped out of the league after joining the Milwaukee Bucks and Boston Celtics for training camps, facing questions surrounding his maturity and work ethic. Amid humbling stints overseas and in the D-League, he’s worked to shed weight and has gained traction as an NBA hopeful.

Gallon, 23, participated in a mini-camp with the New York Knicks last summer and has maintained dialogue with the Philadelphia 76ers this season, sources said.

Out of the basketball famed Oak Hill Academy, Gallon spent one season at the University of Oklahoma, averaging 10.3 points and 7.9 rebounds as an All-Freshman center.