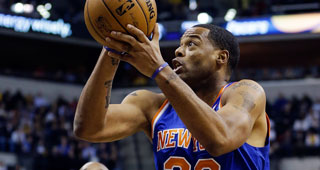 Free agent center Marcus Camby is progressing in his rehabilitation from foot surgery and expects to be fully healthy by February’s end to join an NBA team, a league source told RealGM.

Camby, who underwent surgery before the season for a torn plantar fascia, returned to on-court activities two weeks ago and has shown positive signs in his rehab. Teams must finalize postseason-eligible players by March 1.

Camby was waived by the Houston Rockets to ensure that the organization carried healthy players in the frontcourt, but he made clear a desire to heal the foot and further his 17-year NBA career. He averaged 1.8 points and 3.3 rebounds in 24 games with the New York Knicks last season.

A rugged defender and rebounder, Camby could provide depth to a contender down the stretch of the season, provided his complete recovery. With the Rockets positioned as a title threat and strong respect for Kevin McHale, Camby had chose to sign with Houston in free agency.

At 39, Camby would become the league’s second-oldest player behind Steve Nash. He’s averaged 9.5 points, 9.8 rebounds and 2.4 blocks over his career – including the Defensive Player of the Year award in 2007, four All-Defensive team selections and six double-double seasons.