Rumor: Tim Duncan Could Retire At End Of Current Season 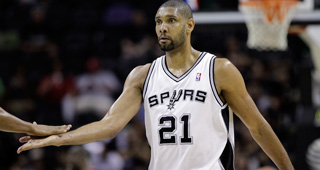 Tim Duncan has a player option for the 14-15 season with the San Antonio Spurs, but he could retire at the end of the current season, according to what George Karl is hearing.

"You know over the weekend, that was the whispers that I got. I got a couple of phone calls, one from San Antonio that said that Tim Duncan's thinking this is going to be his last year. The best, most fundamental big guy ever to play in the NBA, and he leaving would make me very very sad. The San Antonio Spurs without Tim Duncan would be very difficult for me to watch."

Duncan continues to play at an All-Star level.