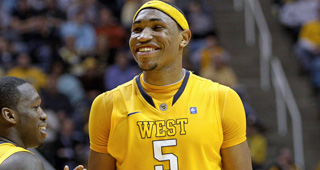 Kevin Jones will sign with San Miguel Beermen in the Philippines for the remainder of the season, a league source tells RealGM.

Jones was playing for the Canton Charge of the D-League, averaging 16.9 points and 8.0 rebounds in 30.5 minutes per game.

Jones appeared in 32 games with the Cleveland Cavaliers in the 12-13 season.