Steve Kerr Could Be Knicks' Coaching Candidate If Jackson Hired 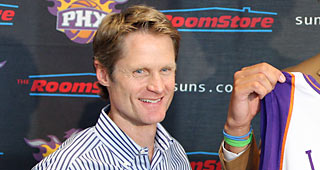 The New York Knicks and Phil Jackson continue to discuss a deal for him to run the front office.

Adrian Wojnarowski of Yahoo! Sports reports that no one in Jackson's camp thinks a deal is "close."

Bill Simmons of ESPN reported on Sunday that Steve Kerr would be a leading candidate to become head coach if Jackson is hired. Frank Isola of the New York Daily News also reports Kerr could be strongly considered.

Kerr is currently an analyst with TNT and was previously general manager of the Phoenix Suns.

"My guess would be Steve Kerr because they're close," said Simmons. "Steve Kerr wants to get into coaching and has said hopefully this season would be the year."