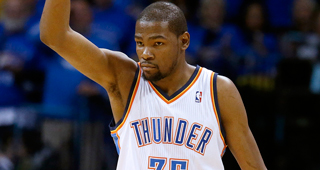 Monty Williams compared the style of Kevin Durant to Len Bias, who was the second overall pick in the 1986 NBA Draft out of Maryland.

“(Durant)’s a very unique player, reminds me of what Len Bias would have been if he played in the league,” Williams explained. “(At) 6-8, 6-9, can shoot it and run, can dunk and defend, play many positions. I’m just impressed by the way he gets better every year and his passion for the game.”

“I think he’s the most unique guy I’ve seen, like Alex English, Glen Rice, Len Bias, all these guys all in one,” Williams said of Durant. “He does everything. You just can’t recall a guy that long who can do what he does every single night. Shooting from 30 feet on the floor with confidence, then driving to the basket and dunking on guys and then go post up. To top it off, he’s a great teammate and a good kid.”