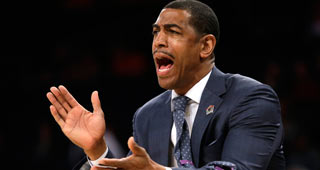 As negotiations on a contract extension progress with the University of Connecticut, Kevin Ollie has received formal contact from NBA teams to discuss head coaching vacancies, league sources told RealGM.

Ollie heard inquiries from NBA teams in recent days, and UConn’s plans to extend the freshly minted national championship coach have moved along, too. Nevertheless, Ollie has engaged in firm discussions in the NBA – nearing the stage of interviewing with a team, sources told RealGM. With Ollie on a busy schedule, no interview is slated to take place during the Chicago predraft combine, sources said.

Around the league, Ollie maintains a strong reputation from his playing days, a 13-year career in which he served as a leadership figure on teams and earned a place through a gritty, relentless approach. Ollie established relationships with the NBA’s current one-two superstars, LeBron James and Kevin Durant, while playing for the Cleveland Cavaliers and Oklahoma City Thunder.

Despite the Los Angeles Lakers’ pursuit to fill their vacancy with a splashy and substantial figure, the franchise has yet to formally reach out to Ollie, a source told RealGM. Within the NBA, the Cleveland Cavaliers have been tabbed as highly aggressive in the chase to ace their next coaching hire.

Ollie had proven himself on the highest level of professional basketball, and the 41-year-old led UConn to an improbable national title this season. For league executives, his collegiate success and league reputation made it inevitable for him to receive an opportunity to translate his coaching to the NBA.

Throughout the NCAA offseason, Ollie has made clear that his loyalty lies with his alma mater UConn.