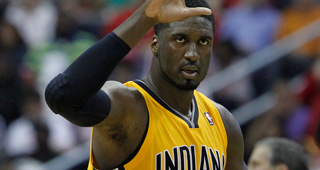 Roy Hibbert's camp hasn't outright asked for a trade from the Indiana Pacers, according to sources. But the word is that they wouldn't oppose a deal to give him a fresh start.

Hibbert has two seasons remaining on his contract, which is worth more than $30 million.

The Pacers would have to take a lot of money back in return for Hibbert and he certainly could have a bounce-back season after a tough second half.