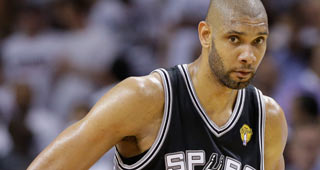 Tim Duncan has until June 24 to inform the San Antonio Spurs on whether he intends to pick up his $10.3 million player option for the 14-15 season.

The contract is set up to provide the Spurs with a fairly firm read on Duncan's plans for next season before offseason business starts July 1.

There has been increasing speculation that Duncan and Gregg Popovich could retire if they win the Finals.