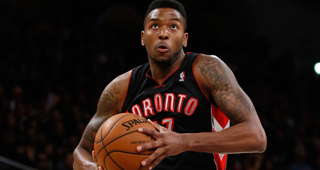 Free agent Julyan Stone will work out for the Lakers in Los Angeles this week, his second visit with the organization before meeting three other teams, league sources told RealGM.

Stone held a workout with the San Antonio Spurs earlier in the week, and he’s received two lucrative offers from Chinese clubs.

At 6-foot-6, Stone has tantalizing frame for a point guard and is one of the NBA’s tallest at the position.

In three NBA seasons, Stone has averaged 1.3 points, 1.1 assists and 44 percent shooting from the field in seven minutes per game. He was an undrafted signing for the Denver Nuggets in 2011, spent two years with the franchise and joined the Toronto Raptors last offseason. He was waived on July 7.