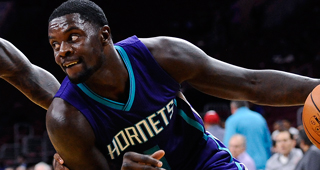 Lance Stephenson has garnered fresh trade inquiries into the Charlotte Hornets’ front office recently and wouldn’t be opposed to a potential move to the Brooklyn Nets, but hopes to remain part of and succeed in his partnership with the Hornets, league sources told RealGM.

Four to five NBA teams have shown an interest to the Hornets on Stephenson, but no deal is imminent, Stephenson has made clear his desire to help propel a turnaround and both sides believe there’s still time to salvage a productive relationship and run with the franchise, sources told RealGM.

Even so, the 6-foot-5 guard has become increasingly comfortable in Charlotte — playing his best basketball of the season so far in December, averaging 16.3 points, six rebounds and 4.3 assists for a 2-1 record.

As a native of Brooklyn, New York, Stephenson attended Lincoln High School in Coney Island. Privately, Stephenson, 24, has unconditional affection for the city and hopes to play for the Nets in the borough at some point in his career.

After a summer headlined by the acquisition of Stephenson to a three-year, $27.4 million deal, the Hornets have gone 6-15 this season under a blend of regression from core players, a return to the bottom tier in points allowed per game after finishing fourth behind Chicago, Indiana and Memphis in 2013-14, and fluctuating trust in the locker room.

As a key contributor toward three consecutive playoff appearances and two in the Eastern Conference Finals, Stephenson found his niche in the league and averaged nearly 14 points, seven rebounds and five assists for the Pacers a season ago. He is in his fifth NBA season out of the University of Cincinnati.