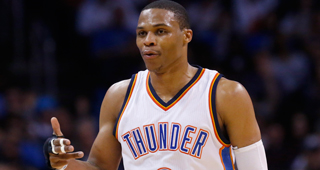 Westbrook has been carrying the Oklahoma City Thunder offense with Durant sidelined.

"Who cares what people say?" said Durant, who missed his fourth straight game Thursday. "[He should] just play his game. From watching the last two games, he's the reason why we had a chance to win -- his aggressiveness, getting his teammates involved.