Miroslav Raduljica Finalizing Deal With Timberwolves For Rest Of Season 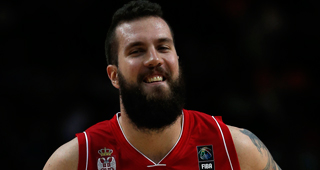 Free agent center Miroslav Raduljica is finalizing a guaranteed contract with the Minnesota Timberwolves for the remainder of the season, league sources told RealGM.

Raduljica, a seven-footer, had spent the past week finalizing his buyout settlement with Shandong of the Chinese Basketball Association.

Raduljica’s agent, Matt Babcock of APAA Sports Group, gauged calls around the NBA upon settling the situation in China and sought a guaranteed deal.

In 48 games as a rookie for the Milwaukee Bucks last season, Raduljica was a tremendously efficient player and averaged 3.8 points and 2.3 rebounds. He shot 54 percent from the field and 81.8 percent from the foul line.

Raduljica was traded to and waived by the Los Angeles Clippers in the offseason and returned overseas in China.

As a breakout performer of the Serbian national team’s silver medal finish in the 2014 FIBA World Cup, Raduljica averaged 13 points and 4.6 rebounds over nine tournament games.