Windhorst: Wiggins Would Have Remained With Cavs If He'd Signed With Rich Paul 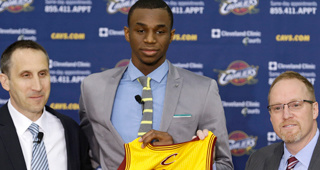 Before Andrew Wiggins' freshman season at Kansas began, Rich Paul was considered the favorite to become his agent.

ESPN's Brian Windhorst reports Wiggins wouldn't have been traded by the Cleveland Cavaliers if he had signed with Paul's agency.

When the Cavaliers signed James, they believed they were going to keep Wiggins and trading for Kevin Love wouldn't have had to include the first overall pick of the draft. James left Wiggins out of the his return to Cleveland letter and he was soon included in trade talks.