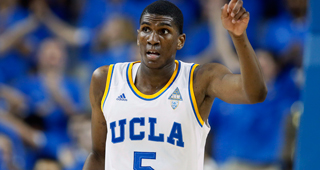 UCLA freshman forward Kevon Looney has plans to declare for the 2015 NBA Draft and is closing a representation agreement, sources told RealGM.

An active athlete at 6-foot-9, Looney, 19, had been considering several top representation firms and will be in strong contention to become a lottery pick in June.

UCLA's coaching staff admitted to reporters on Tuesday that the NBA could be too tantalizing for Looney to return should he believe in being a top 12 selection.

As the Pac-12's Freshman of the Year and member of the conference all-first team, Looney scored 11.6 points and grabbed 9.2 rebounds per game. He helped lead UCLA to the Sweet Sixteen where the Bruins lost to Gonzaga.

Looney was born in Milwaukee, Wisconsin, and chose the Bruins as his collegiate team after an extensive recruitment process.