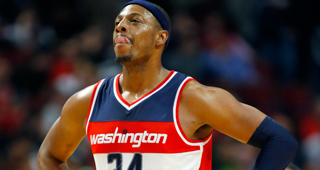 During a Philadelphia radio interview with 97.5 The Fanatic on Wednesday, Larry Brown remembered that the Philadelphia 76ers actually ranked Paul Pierce the No. 2 prospect in 1998.

But the 76ers passed on Pierce and instead selected Larry Hughes.

Pierce and Allen Iverson could have formed a remarkable scoring tandem.