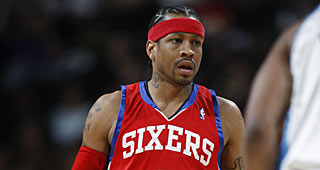 Despite signing an agreement to coach a Chinese tour, Allen Iverson has been pushed so hard to play by local promoters in Harbin, China, that officials held the 11-time NBA All-Star in the city and delayed his next stop, sources told RealGM on Thursday.

Iverson won in his head coaching debut Wednesday, leading Team Iverson to a 10-point victory over Lioning. A future basketball Hall of Famer, Iverson no longer has a desire to play, thus signing a coaching deal for the tour. Still, local promoters in Harbin wanted him to step outside of his contract and put on a jersey, later preventing him to move forward on the tour against his will, sources said.

Iverson remained on the sideline as coach, and after the game went to a promotional dinner that included Yao Ming. When Iverson readied to depart for a 6 a.m. flight Thursday to Xi’an, sources say local fans and promotors closed off transportation, leaving him without a plane until later in the day. There was strong support within Iverson’s family to scrap the tour and return to the United States.

As one source told RealGM, “He did everything he could to leave for his next city, and they still held him hostage. For a guy who's beloved in China, it was ridiculous.”

Iverson, the No. 1 overall pick in the 1996 draft, cemented a remarkable legacy in 14 NBA seasons -- including the 2001 Most Valuable Player award, four scoring titles, two All-Star game MVPs.

Iverson announced his retirement from basketball in October of 2013.