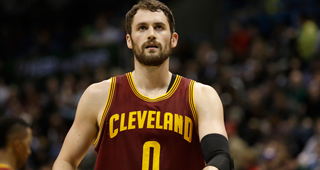 Kevin Love is out for the season following shoulder surgery and is expected to become a free agent this summer.

Love had an uneven first season with the Cleveland Cavaliers.

"Every executive I talk to, every agent I talk to, every quasi insider, every girlfriend's cousin's sister's boyfriend all says this guy is out of there," said Brian Windhorst during a podcast with Zach Lowe.

"I hear the same thing from everybody," said Lowe. "From everyone that is two or three or four steps removed. I don't quite believe all of that."

"Part of what's going on there is the Lakers' boogeyman," said Lowe. "They don't just say he's out of there, they say 'He's going to the Lakers.' That has much to do with the fear people have of the Lakers as it does with Kevin Love."

"I can't get a read on Kevin," said Windhorst. "His personality is a little bit different than many players I've covered. He has at every turn even gone out of his way to make statements about how he intends to remain in Cleveland."

Windhorst has also mentioned that Love has seemed distant from the Cavaliers post-surgery, attending just one game. Love is unable to fly yet following the surgery.