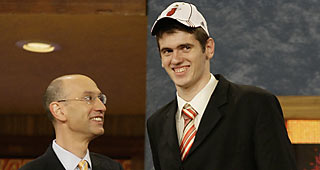 Barac, a 7-foot-2 center out of Croatia, turned his attention this year toward making the leap into the NBA. He signed a deal with Cedevita in the Euroleague midway through the season, gradually improving his play.

Barac went to the Miami Heat with the 39th overall pick in 2007 and was traded to the Pacers on draft night.

Indiana will use the mini-camp to decide their future with Barac and whether to sign him, or potentially include him as part of a move, sources said. Barac will travel to Indianapolis for mini-camp workouts from June 13 to June 18.

Barac, 28, had a 27-point (nine of 10 shooting) and seven-rebound performance last week against Zagrab, and is averaging 9.9 points and 5.5 rebounds per game for the season.

Barac has played professionally for Baskonia, Valencia, Efes and Cedevita.