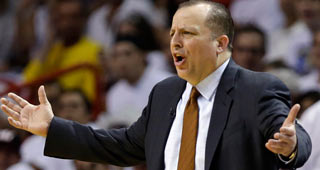 Jerry Reinsdorf remains the wild card in the contentious battle between the Chicago Bulls' front office and Tom Thibodeau.

Both the front office and Thibodeau would like to part ways, but the Bulls don't want to fire him to have him coach another team next year without compensation.

Thibodeau's contract contain offset language, meaning the Bulls' financial commitment would be "offset" by the amount he would make if hired by another team.

Reinsdorf, according to several sources, was extremely upset with Thibodeau after Jeff Van Gundy criticized the organization during a January broadcast on ESPN for historically undermining coaches.

Reinsdorf, who has served as an occasional oasis for Thibodeau during his rocky relationship with management, discussed the incident with Thibodeau.