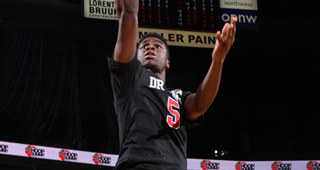 Emmanuel Mudiay has scheduled only two predraft team workouts so far: the Los Angeles Lakers on Saturday and Minnesota Timberwolves on June 20 and possibly sooner, with the T’Wolves convincing the 6-foot-5 guard that he’ll be under serious consideration with the No. 1 overall pick, sources told RealGM.

Minnesota recently reached out to Mudiay and its front office laid out a vision for a roster with him, Andrew Wiggins and Zach LaVine, sources said.

Mudiay spent the season in the Chinese Basketball Association, averaging 18 points in 12 games while sitting out for a stretch due to an ankle injury.

Mudiay has no workouts scheduled yet with the Philadelphia 76ers or New York Knicks, but is willing to visit every team in the top five, including the Orlando Magic. The Sacramento Kings have the No. 6 pick.

Mudiay, 19, went to high school in Texas and had committed to SMU before leaving to turn pro in China.