D'Angelo Russell Moves Ahead Of Okafor On Some Team's Boards 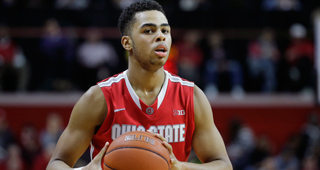 D'Angelo Russell has moved past Jahlil Okafor on the boards of many teams, which is reflected in the latest Big Board of Chad Ford.

The play of Stephen Curry and James Harden has helped the draft stock of Russell, a playmaker and perimeter shooter. The same trend of low-post scorers falling out of fashion has hurt Okafor.

Russell ranks No. 1 or No. 2 on most analytical models used by NBA Teams.

Russell appears to have a narrow draft window with either the Los Angeles Lakers or Philadelphia 76ers expected to select him.