Greg Oden Working Out For Mavericks, Hornets As Part Of Free Agent Camps 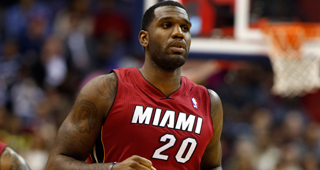 As Greg Oden attempts a return in the NBA, the former No. 1 overall pick worked out for the Charlotte Hornets on Wednesday and will visit the Dallas Mavericks this week, league sources told RealGM.

Oden will be part of the Mavericks’ free-agent mini-camp that includes wings and several big men, such as Keith Benson. The 7-foot Oden had worked out for the Memphis Grizzlies in the spring, and the franchise is expected to continue to monitor him.

The first overall selection to the Portland Trail Blazers in 2007, Oden was considered a generational pro prospect capable of having a career arc similar to the NBA's all-time big men greats.

He played with the Miami Heat last season, scoring 67 points and grabbing 54 rebounds in 23 games.

Oden's close friend and former teammate, Mike Conley, spoke late this season about the possibility of Oden's comeback. Surely, Oden’s comfort level with the Grizzlies rises with Conley’s stature on the team.
In averaging 15.7 points and 9.6 rebounds, Oden led Ohio State to the NCAA championship game in 2007 and had the base of a foundational player at the NBA level. Nevertheless, knee injuries provided constant setbacks.

Oden, 27, has played two NBA seasons for Portland and one for Miami.