Tobias Harris To Pursue Near Max Deal With Pistons, Celtics Among Leading Suitors 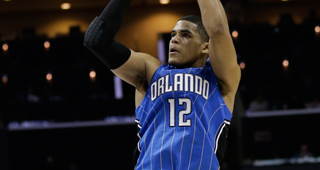 As Orlando restricted free agent Tobias Harris will pursue a maximum-level offer sheet on July 1 that the Magic possibly won’t match, the Detroit Pistons and Boston Celtics have emerged as leading candidates for the talented forward, league sources told RealGM.

Harris, 22, is among the top young players on the available market, and could be the most vulnerable restricted free agent to leave his team. Around the NBA, several teams are believed to be open to preparing a near-max contract for Harris — which could approach $15 million-plus per season, an area the Magic likely elect not to match given the course of extension talks last October and their current team salary structure.

For the Pistons, there is a vision of using Harris as a potential hybrid stretch-wing, capable of playing the small and power forward positions. Several NBA personnel told RealGM that Harris’ slashing and outside shooting will jibe instantly with Stan Van Gundy’s system.

In Orlando, Harris has maintained dialogue with Scott Skiles, his former coach, throughout the year, exchanging encouraging messages. Nevertheless, Orlando's desire to match a maximum-level offer sheet on Harris has been in question.

The two sides couldn’t reach an extension last offseason, Orlando sticking to offers below the $10-to-$11 million that Harris desired — and now promises to surpass. The Magic selected Mario Hezonja, 6-foot-8, with the No. 5 pick in Thursday’s NBA draft. Harris dealt with an ankle injury over a stretch of the season, giving the Magic reason to use him in a lesser role.

The Los Angeles Lakers and New York Knicks have also been long known as interested teams for Harris.

Out of Tennessee in 2011, Harris went to the Milwaukee Bucks with the 19th overall pick in the NBA Draft. He spent two years with the Bucks before being dealt to Orlando in 2013. Over four NBA seasons, Harris has established himself as a tremendous citizen in the community, with a strong work ethic on the court shown in year-to-year leaps. He was drafted with star potential and has sought to reach the level through offseason training.