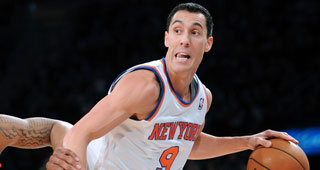 Free agent Pablo Prigioni has reached agreement on a contract with the Los Angeles Clippers, a league source told RealGM.

After the Houston Rockets sent Prigioni to the Denver Nuggets in the Ty Lawson trade, the 38-year-old veteran point guard cleared waivers on Wednesday. Prigioni then committed to a deal with the Clippers.

Prigioni has established himself as a reliable lead guard in three NBA seasons. He’ll give the Clippers a deft playmaker, able to utilize his ball handling and experience to run offensive sets.

Prigioni averaged 4.1 points and 2.6 assists in 17.9 minutes per game last season. He has averaged 3.8 points and three assists over his career, shooting 39.8 percent from 3-point range.

Prigioni, a native of Argentina, had a decorated career overseas before breaking into the NBA in 2012 with the New York Knicks.