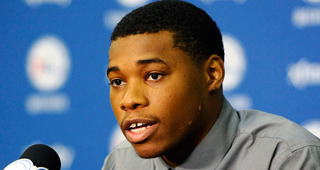 Holmes was selected with the 37th overall pick in the June NBA Draft by the 76ers, a rapid riser through the pre-draft process. The first two seasons of Holmes' deal will be fully guaranteed, sources said.

Holmes posted 29 points, 15 rebounds, four blocks and three steals in 56 total minutes in three games before suffering a broken elbow in a summer league game. The 6-foot-10 forward continued to play through the injury, checking back into the game after his fall.

Holmes, 21, has made significant strides in his recovery from a broken elbow and is expected to be fully healthy for 76ers training camp.