George Karl: I've Got A Crazy Team, And I'm Kind Of Crazy 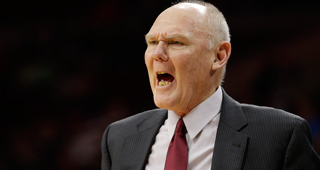 The manager of DeMarcus Cousins, Andrew Rogers, was ejected from Tuesday's game after making contact with Jason Terry.

Rogers knocked Terry’s hand away after Terry made contact with him while running past the basket, following a Ben McLemore dunk.

Cousins ran to that end of the court when he saw what was happening, and security was ready to defuse the situation.

“My biggest thing is, I didn’t want the situation to escalate too far,” Cousins said.

“I’ve got a crazy team, and I’m kind of crazy,” George Karl said.

“There’s some type of saying,” said Cousins. “A team usually matches the coach.”

At 10-15, the Kings are only a game out of the eighth spot in the Western Conference, even amid all the drama.

“When you’ve been in a drought for so long of not making the playoffs, we’re looking at that (standings) board every day,” Darren Collison said. “... We want to make the playoffs. That’s the whole goal this year, nothing else.”