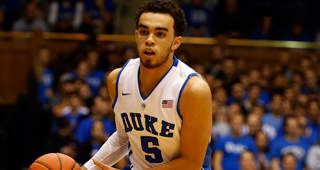 The Minnesota Timberwolves have recalled rookie guard Tyus Jones from the Idaho Stampede of the NBA Development League.

In six games, all starts, for Idaho, Jones averaged 24.7 points, 3.9 rebounds, 5.0 assists and 1.5 steals in 35.2 minutes per game. He shot 48.7 percent from the floor, including a 42.6 percent mark from three-point range during his stint with the Stampede. In his final game before being recalled, Jones scored 30 points while adding five rebounds and five assists.

Jones, originally selected with the 24th overall pick, was acquired by the Wolves in a draft-day trade with the Cleveland Cavaliers. Jones has appeared in two games this season for Minnesota, averaging 0.5 points in 6.9 minutes per game.